Stereoscopy is the art and technique of creating three-dimensional images from the fusion of two slightly different two-dimensional views of a scene.

Stereoviews (sometimes called stereograms, stereocards, stereo pairs, or stereographs) are cards featuring two images, taken from slightly different angles, printed side-by-side, with one image intended for each eye. When viewed through a stereoscope, the two flat images appear combined and an illusion of depth is created.

How does it work?

Stereoscopy works the same way as our normal, binocular vision. Since our eyes are positioned an inch or two apart, we view everything from two slightly different angles. Our brain processes these into a single image, and through this process depth and dimension are created. Through this created depth we are able to judge distance.

A great way to demonstrate binocular/stereoscopic vision is to hold a finger out in front of you. Close one eye and look at your finger –then quickly alternate back-and-forth with the other eye. When looking to the background, you should notice your finger jumping back and forth. 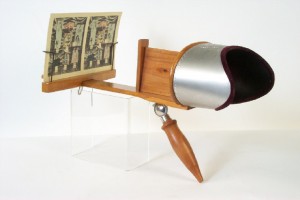 Stereoscopy has been around long before the recent infatuation with all things 3D. The earliest stereoscope was invented by Sir Charles Wheatstone in 1838. His viewer used a pair of mirrors at 45 degree angles to the user’s eyes, each reflecting a picture located off to the side. About a decade later, David Brewster developed a lenticular stereoscope. His invention, allowing for a reduction in the size of images, introduced the first hand-held devices. Stereoscopy took off in the 1850s. Hundreds of thousands of stereoviews were created, allowing people to travel the world from the comfort of their parlours. The most popular and economical viewer is the Holmes stereoscope. Created in 1861 by Oliver Wendell Holmes, this unpatented viewer is made of two prismatic lenses and a wooden stand that holds the stereocard.

Wiggle Stereoscopy: Click on the picture above to open a new window and view the animated gif.

Wiggle stereoscopy produces a 3D illusion by quickly alternating the display of left and right sides of a stereogram. Typically produced as animated GIFs, wiggle stereoscopy is a fun and effective way to demonstrate the 3D effect on the web. While the wiggle form is fun and easy to share, we find the effect pales in comparison to the viewing of high quality images through a stereoscope.

TnT Stereoscopy maintains a tumblr site featuring a sampling of animated gifs of some of our favorite stereoviews.