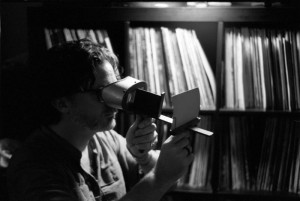 TnT Stereoscopy is the hobby and passion of Tony Jenkins.  Tony is one half of TnT, the dynamic duo of Tony and Tiffany Jenkins.   Tiffany has been a gracious model and inspiration for many of Tony’s early stereoscopic work.  Tony began has interest in stereoscopy at an early age when he was introduced to his grandparent’s Keystone Stereographic Tour of the World set.

Envious of the pleasure he saw Tiffany derive from her many art projects, Tony sought out to learn the art and technique of stereoscopy.  He created his first stereoscope camera rig out of two matching digital cameras (one “borrowed” from his mother).  This handy rig is still in use today.

Keystone Tour of the World

TnT Stereoscopy seeks to kindle a revival of old fashioned stereoscopic photography.  While 3D technology is becoming readily available for the average consumer, TnT believes the earliest forms of 3D tech are the most magical, creative and expressive.

Don’t forget to check us out on facebook where we post original and historical photos often.  Also, be sure to check out our wiggle stereoscopy samples on our Tumblr Site.